when in doubt, change it out... Using fresh mixed water...

Not a lot, but because the light is close to the surface, you get the bubbles.
when in doubt, change it out... Using fresh mixed water...

Tank 2 has a berried female.
No picture as the algae on the tank walls make it difficult to take a clear picture. I could clean the algae off, but I don't want to disturb the Opae in tank 2 as they are well behind the other two tanks. Even though it was setup before tank 3.


Tank 1:
Odin's lot just keep having more and more babies.
The tank does not make any sense.
The walls of tank 2 and 3 are covered in green algae. Tank 1 has none, just some dark diatoms on mostly one side.
The main difference is the large rock pile and lots of biohome filter media


Tank 3:
This morning there was a lot of movement, almost like a stamped. Normally the Opae in tank 3 just spend their time on the rocks. But before a female becomes berried, Nearly all the Opae start charging about all over the place.

The baby jar:
Early this week I decided to pour out most of the Opae in the round jar, into a new cube that I had setup almost 2 months ago. I had put 3 Horned Nerite Snails in the new tank and some colonised filter media to cycle the new tank and keep it going until I needed it.

2 Opae managed to stay behind in the round jar, which I don't mind as it's useful to keep the jar cycled while I wait on the new babies to drop.


I'm hoping for more Opae with colour in them, as nearly all of the babies so far have grown up mostly white with only a hint of red.
when in doubt, change it out... Using fresh mixed water...

Only thing of note is that tank 2 has had more babies since the last lot (a couple of months or so ago). Most look to have gone from the floating stage to tiny shrimp stage. Last time I only counted 3 babies in total, this time I definitely saw more than 5.

I wish I could take pictures, but I'm concerned that cleaning the front of the tank would cause problems for the Opae, as they are very slow at breading and I've had them longer than the ones in tank 3.

With tank 3, I've started off with 13 Opae and am now at about 40, the increase has been just this year.
when in doubt, change it out... Using fresh mixed water...

I was in the process of upgrading the offspring tank from a small 15cm cube to a 1.5 gallon biscotti jar (found them for a very good price).

The amount of distilled water I can produce limits me a bit. Plus when I go away for a while, I move the tanks to a different part of the house, where it's more suited for the Opae, when they'll be alone. So the tanks need to be easy to move.

It's an interesting situation to be in.

Might be an interesting experiment, to separate the F2 offspring and keep them in a tank (1.5 gallon biscotti jar) by themselves and see how they develop (over the next 20 years). Only concern would be the limited genetics in that situation.
when in doubt, change it out... Using fresh mixed water...

#8697  by opae ula related
26 Dec 2019 16:09
Where did you purchase the import generation?
Why wouldn't the Opae Ula share his food? Because he was a little shellfish

opae ula related wrote:Where did you purchase the import generation?


I covered that in the first couple of posts and why I don't recommend the seller, you can find the name in the image showing the tanks: 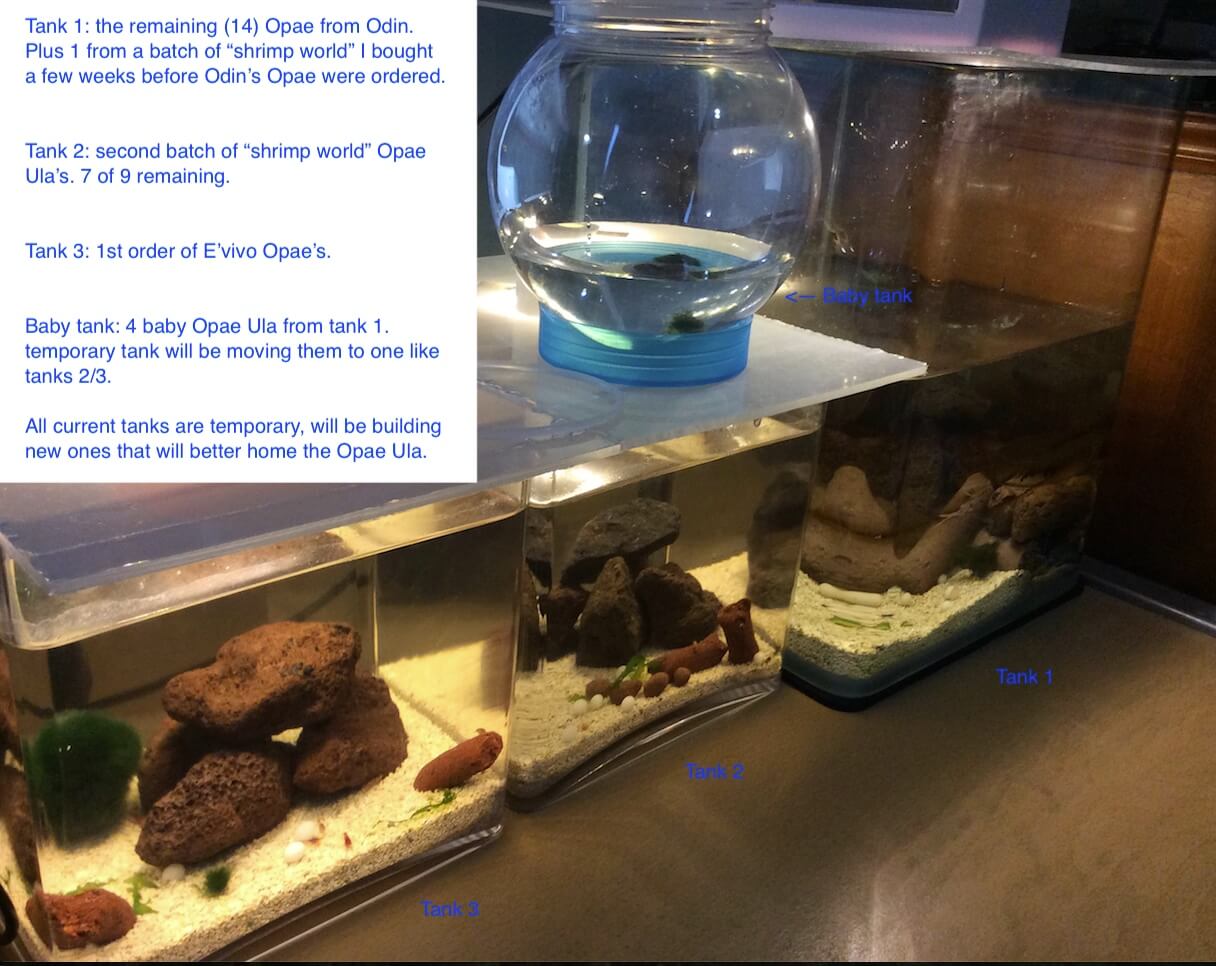